Need something to watch that channels your righteous female anger? Step right up. 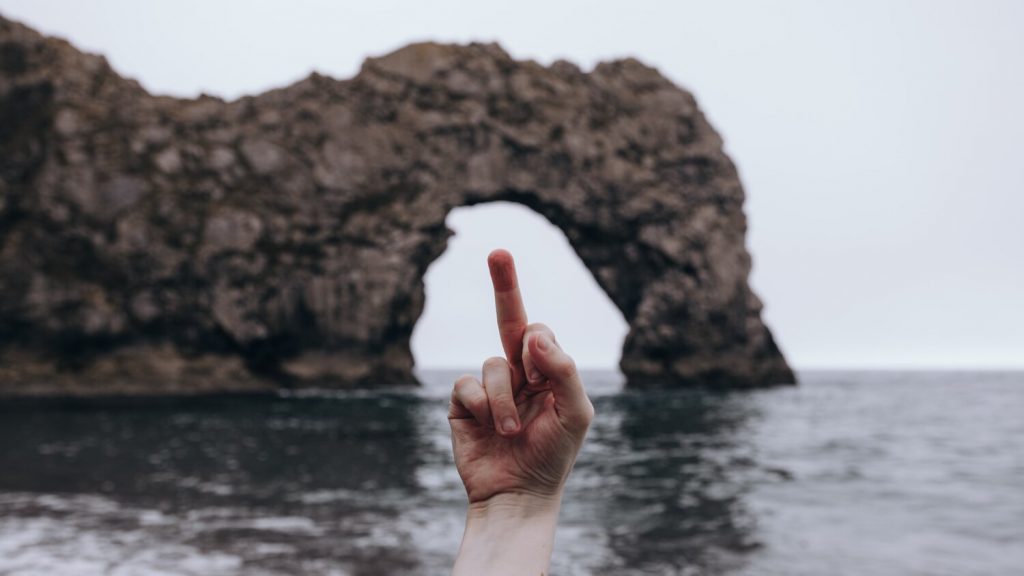 I have long felt that, as women, we are pushed towards sadness as an acceptable display of emotion. Crying like a girl, etc. But for me, and for a lot of my lady friends, it is not sadness I go to the quickest, but anger. And that’s on a good day. You add a variable into that equation, like exhaustion, or hormones, or idiot men, and that match lights up even faster. If you’re in the mood to watch a woman, fuelled with vengeance, kick down some doors and kick someone’s ass, boy do I have the viewing recommendations for you.

Note: There’s no content here where the women are killed, raped or punished for having sex. This is a common revenge trope and it has no place on this list, IMO. Also, I wrote this story while listening to this Angry Women playlist and I recommend you listen to it while reading this story, or during any other activity you need a rage soundtrack for. Other than that, enjoy. Say hi to your period from me! 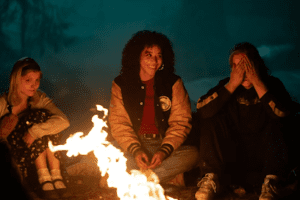 There WILL be blood when you take an all-female team of fiercely competitive soccer players and leave them stranded after a plane crash for months on end. Yellowjackets (streaming on Neon) is part Lost, part Lord of the Flies, part Pretty Little Liars and is a real showcase for both adolescent and mid-life rage. The show flips back between the teenage survivors of a plane crash in the nineties and then those that made it off the island, 20 years later (starring a whole host of 90s favourites like Christina Ricci, Juliette Lewis and NZ’s own Melanie Lynskey, all absolute joys to watch).

As teenagers, they rage, sync their periods, screw each other, screw over each other, perform light witchcraft and – if the first five minutes of the show is anything to go by – eventually… eat each other? The (non-edible) surviving adults behave much the same way – they rage against their suburban cages, effortlessly screwing up their own lives and marriages in the process, and their anger lives so closely under the surface that you can basically hear it pulsing away in the background in every scene.

They are as fearless as they are furious and it makes for VERY GOOD television. Plus there’s a scene where Juliette Lewis trashes an entire hotel room when a phone call annoys her that is so satisfying to watch, I laughed out loud. This is a kind of girls gone wild plot line I can really get behind. 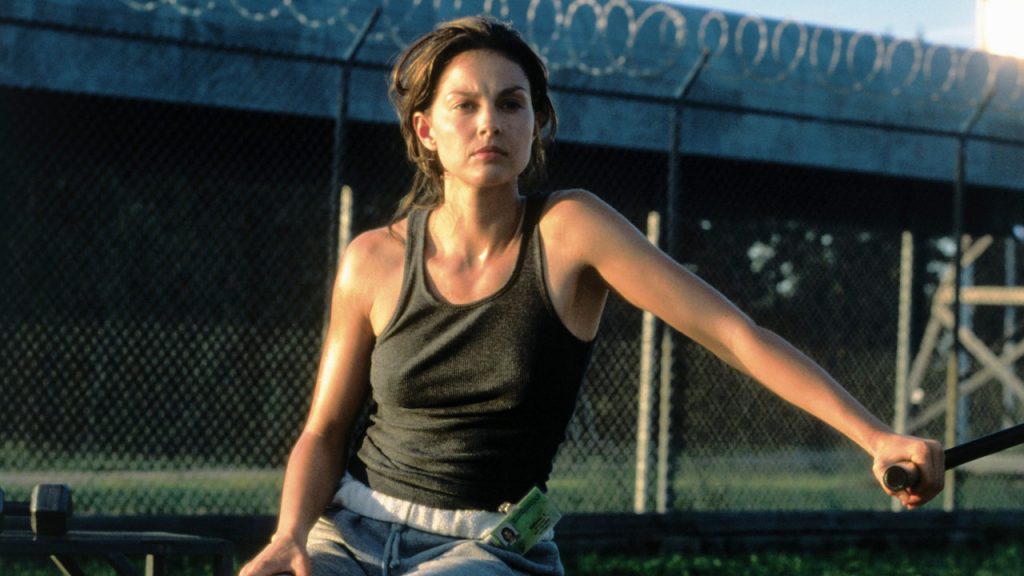 I will say on the record now, this might be the best movie ever made. Released in 1999, Ashley Judd is wrongly accused of killing her husband and goes to jail for his murder, when… hang on. He SET HER UP. But, hang on again – she’s already been tried for his murder, so now she’s free to seek revenge and claim back her son. This isn’t really a spoiler, because the clue is in the movie’s name. This movie has everything: Tommy Lee Jones being a mad cop, a revenge ballgown, New Orleans, a wise-cracking prisoner who knows the ins and outs of the law and, most importantly, a training montage. Once she knows she’s been wronged, Ashley Judd pumps weights and runs around the prison field in the pouring rain, getting physically ready to track and kill her husband. “There’s nothing but pure hate driving her,” says her new prison best friends, with total admiration. When I’m trying to channel my anger (or finish a very hard Pump class),
I pretend I’m in this scene. 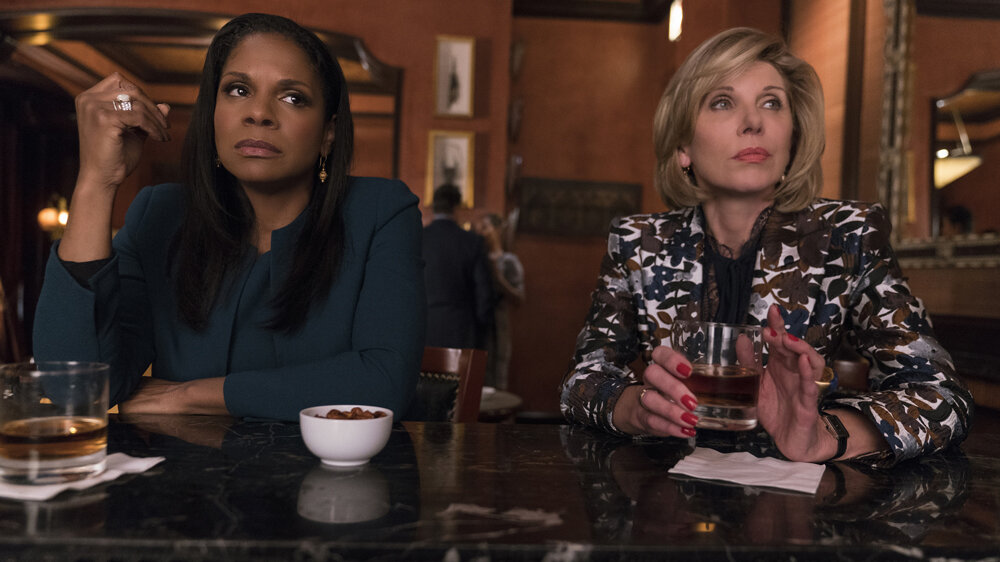 It stars Christine Baranski, so you already know that it’s perfect. But then you add in Audra McDonald, and good Lord. It’s the spin-off of The Good Wife, but you don’t need to have watched that (excellent) show in order to love it. Christine plays a powerful lawyer Diane Lockhart who, on the eve of retirement, loses all her money in a scam and has to return to work, only she’s so tarnished by the scandal no-one will hire her apart from an all African-American law firm. This show is magnificent, clever, batshit crazy and is fuelled by the rightful anger felt by women and minorities since Donald Trump was voted into office. If the international news cycle ever gets you down, this show is the antidote. Watch the opening sequence here for a hint of the operatic levels of rage this show has to offer. Trust me. 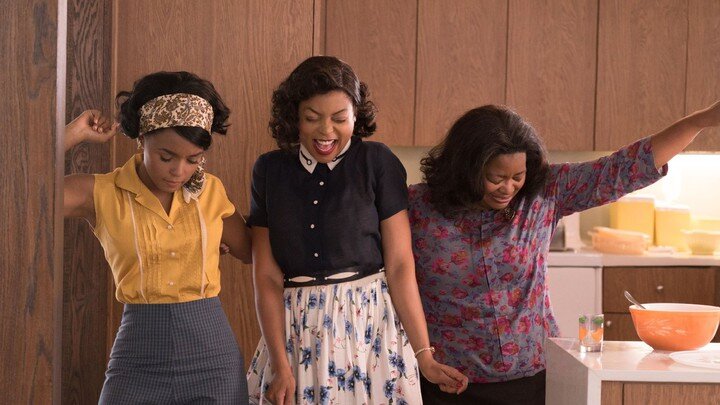 Sometimes revenge doesn’t come through violence, sometimes it comes from being the smartest person in the room and biding your time until everyone realises it. “Living well is the best revenge,” is something my wise mother always says and that is the story of three characters, based on real-life heroines, who broke through the racial restrictions of NASA in 1961 to become crucial engineers in the space race. These women use maths, not moves, to conquer the world, and that might be the mood your period brain requires. 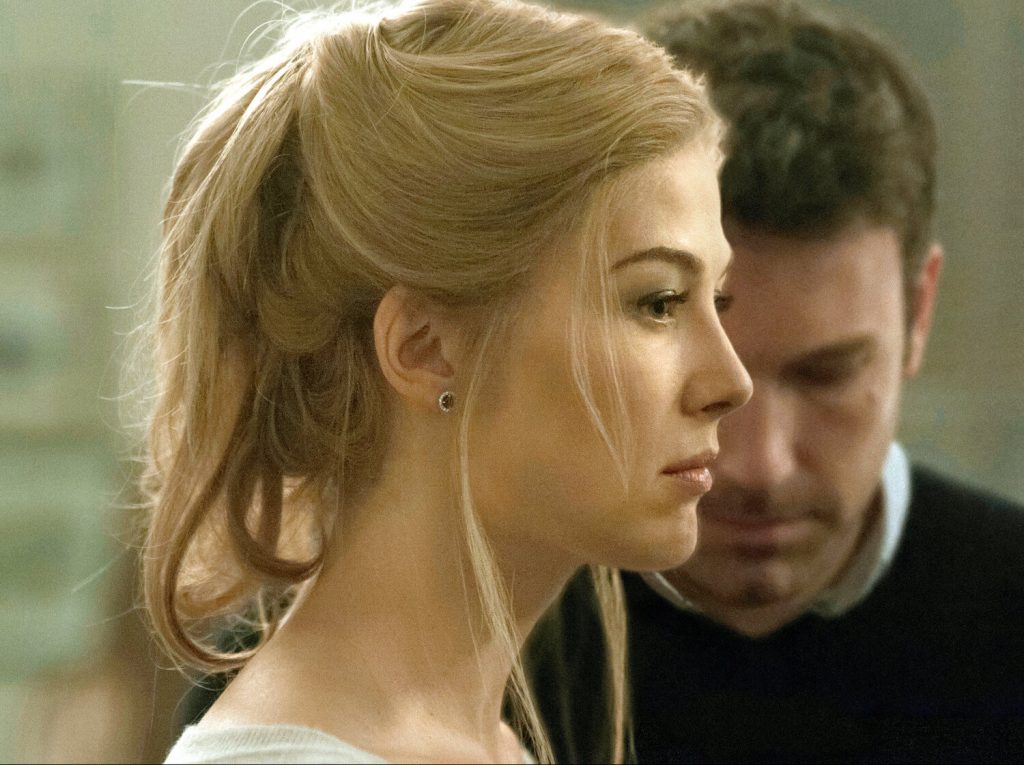 Woah, nelly. Based on the hugely popular book, this movie stars a perfectly bland Ben Affleck and the sensational Rosamund Pike. It’s about a seemingly dreamy marriage that suddenly gets called into question when the wife goes missing and the husband is suspect #1. If you know nothing about the story, good. Stop reading now and go watch it. If you’re looking for a vengeful anti-hero, this is the one. Come for the mystery, stay for the Cool Girl Monologue. 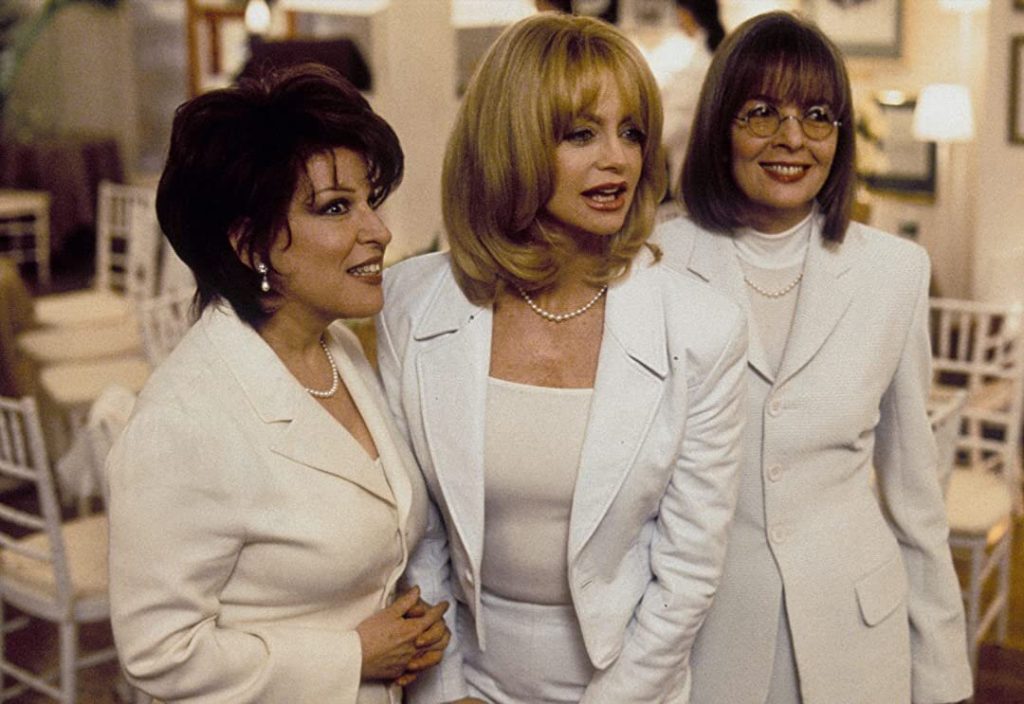 Generally speaking, I don’t love a break-up movie because they are cliché as hell and always about some devastated 27-year-old worried she’s getting “too old” to find true love. Cry me a river, babycakes. However, First Wives Club is a divorce movie that taps into the general malaise of giving someone the best years of your life and then having them trade you in for a younger model. Burn in hell, mid-life crisis males! The tag-line for this movie is ‘Don’t get mad, get everything.’ Three women, each wronged and each WONDERFUL, decide to inflict total destruction on their ex-husbands. You probably know the song already, but even so, watch it again for a treat. 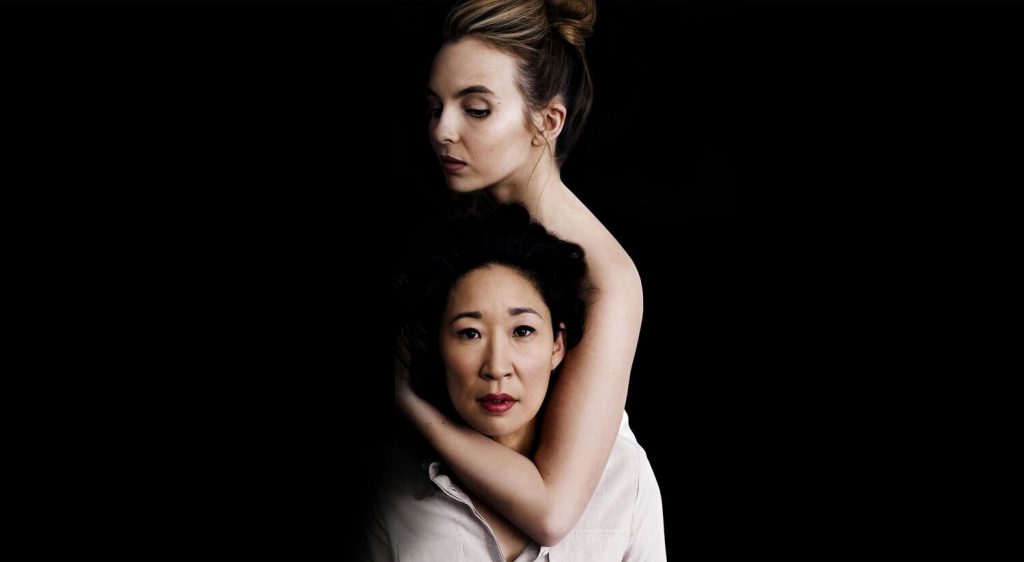 I would watch Sandra Oh read the phone book and call it a masterpiece, but there’s no need for hyperbole with this fantastic show. The first series is run by Phoebe Waller-Bridge, the writing genius behind Fleabag. Sandra Oh plans a bright but bored MI5 agent who becomes professionally, and then personally, obsessed with a psychopath assassin known as Villanelle (played by newcomer Jodie Comer). Both women become involved in a pseudo-sexual cat and mouse game where revenge is the name of the game for both of them. Men don’t really play a large role in this show, which is perfect if you’re in a mood where you don’t want them to exist. (Can you tell I’ve been wronged in the past?)

Young girl sees her beloved dad framed for a crime he didn’t commit, grows up with an absolute thirst for revenge. Luckily, she’s inherited one bazillion dollars so is able to assume a new identity and move into the richie-rich Hamptons, right next to the family she hopes to destroy. This TV series is camp-as hell ridiculous and Emily/Amanda (our blonde villainess) helpfully crosses off all her enemies with a bright red pen, so you’re never confused about who’s next. Absolutely we should fear a woman with a plan and the stationery supplies to match it.

Dating Without Borders: The Surprising Charm Of Long-Distance Romance

'If, like me, your children are grown and you simply want a special someone to have adventures with, the long-distance romance has a lot...

2022, The Year of YES! How and Where Kiwis Want To Travel This Year Revealed

Finally, the friendly skies look like they're opening again! Grab that passport (ok, first find that passport) and head off on an adventure -...

When Madeleine Dore first started up her Extraordinary Routines website, it was to uncover the secrets of living an organised and creative life. Five...

Investing - it's an intimidating-sounding term that, for some reason, women have historically been apprehensive about doing. But if you're like us at Capsule...

Got a big ol’ case of female rage? Have we got the viewing recommendations for you

The Divorce Diaries: Love After a Betrayal. One Woman’s Second Chance, Plus Expert Tips For Finding Love Again After a Nasty Split

Thinking About Adding More Colour to Your Home But Have No Idea How? Try These Award-Winning Palettes and Projects for Inspiration!

The Gift Guide Collection: The One for Joy All Year Round (And Perfect for the Last Minute!)

‘The Drawer of Shame is Dead!’ What It’s Like Owning an Adult Toy Company – & Why Women Are Now So Comfortable Talking About...